Journey of one man

My journey as characterized by the Genographic project using my dad’s lineage demonstrates a world without boundaries. In modern times, my family had hardly stepped out of a thin strip of land, 50 miles wide and 350 miles long at the Southwestern tip of the Indian peninsula. However, it appears that we arrived there recently, having taken a very circuitous and yet to be researched route – M241. 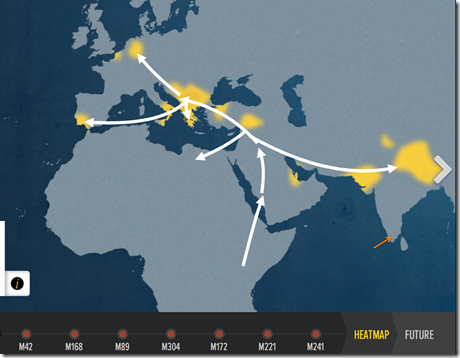 The wide distribution of the M241 haplo group covering Greece, Italy, Spain, the Arabian peninsula and India is interesting. Although more data is needed to fully characterize the path, it may indicate that we reached our present home in the Southern tip of India recently. Relatively high Mediterranean percentage (14%) in my DNA is consistent with the haplo group distribution. A 2% share of my DNA claimed by Native American characteristics also show connections to Mongolia, the only other region in the world that harbors similar markers.

Segmentation schemes invented by humans – countries, religions and languages – consume most of the world’s mental capacity today. An objective look back into our own DNA may solve most of the problems faced by the modern human.
Posted by Gill Eapen at 9:44 AM