Recent revelations of the apparent horizon, trumping the long held notion of the event horizon, is symptomatic of mathematical manipulation and resulting unverifiable constructs. The “theory of everything,” has to include the undeniable fact that physicists, given enough time, will cook up confusion and make it sound plausible. Once stated, the theory can be proven by experimentation – especially by the kind that creates infinite noise that affords any proof.

The assertion that black holes exist is a necessary condition to engage in hypothesizing their properties. After nearly a century, most are still looking for the underlying reasons for dark matter, energy and flow. None has been forthcoming – even in the presence of enterprising engineers hiding their detectors deep under-ground and far above-ground. Papers have to be published, prizes have to be won and egos have to be nourished. Story tellers have become super stars and the “science men,” have pushed the ignorant into the abyss.

The playground of physics has become dirty and it is no different from ignorant politicians attempting to cure the ills of the world.
Posted by Gill Eapen at 10:10 PM No comments:

The entropy of nations 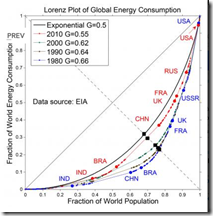 ropy condition, nestled half-way between perfect equality and inequality. The authors argue that this is likely the equilibrium condition for the status-quo.

To jostle nations out of this status-quo equilibrium requires something dramatically better. Alternatives have been threatening to upset the apple cart for long. Short sighted politicians and energy tycoons have been chasing the sun, wind and fire to get an upper hand on the energy equation. If extraterrestrials do exist, humans would be an unsurpassed reality comedy show on their TV sets. How stupid does one have to be to burn fossil fuels that reduce the air they need to live in a constrained greenhouse.

Intelligence is about breaking the status-quo equilibrium condition.
Posted by Gill Eapen at 7:51 PM No comments:

A recent paper from Cornell shows experimentally that time could be an illusion – a property fully internal to the system. Time materializes only in an entangled state, when an observer is entangled with the “clock,” – a mechanism to measure. Using an entangled state of the polarization of two photons, they show that one is able to gauge the evolution of the other, visualizing time. For an observer, outside the system, everything appears stagnant – with no concept of time.

Although conceptually difficult to internalize, the existence of time bothered many in the past. If time exists only if the observer is entangled with the measuring instrument, then, the paradox of increasingly meager life becomes even more ridiculous. If the split between past and future is an illusion, it means that such a distinction is only made by the entangled observer and not anything or anybody else. Such an observer, is in a sort of time jail, unable to escape. Every external participant is unaware of her motion in time.

Lack of time means no emotions or imagination. Did humans need time or was it just an accident? Did the internal clocks of biological systems entangle voluntarily with the universal clock? Was such an entanglement a necessary condition for the formation of life? Is it possible to break out of the constraints of time?

Posted by Gill Eapen at 6:10 PM No comments:

Research from Duke indicates that the recently launched “Materials Genome Initiative,” is already beginning to yield results. Their study published in Physics describes a new Platinum group compounds with interesting properties. Humans are finally shaking off the perils of industrial revolution, when scale was the only consideration – mine, smelt, roll, build and sell – to the masses. Early automotive tycoons didn’t even want to color their end products as they feared loss of efficiency.

Lack of progress in materials sciences has held humans back in virtually every field. In computing, packing conventional silicon ever closer to increase speed has led to thermal and quantum tunneling limitations in chip design. In space travel, inelegant designs that use massive amounts of conventional fuel to propel heavy payloads into orbits, has been the norm for decades. In medicine, drug delivery continues to rely on decade long techniques that is akin to carpet bombing with little access to the brain. In transportation, traditional materials based designs are responsible for the highest number of deaths on the road and high energy use in other modalities. Century old building techniques and materials have led to energy inefficient homes aiding accelerating green house effect.

It is time to step back from mass manufacturing to intelligent materials based design in every field.

Posted by Gill Eapen at 6:48 PM No comments:

Research from Harvard (1) provides an overall measurement of social progress for countries all around the world. Although there aren’t many surprises in the list, it does point to an overall disparity between social conscience and progress. 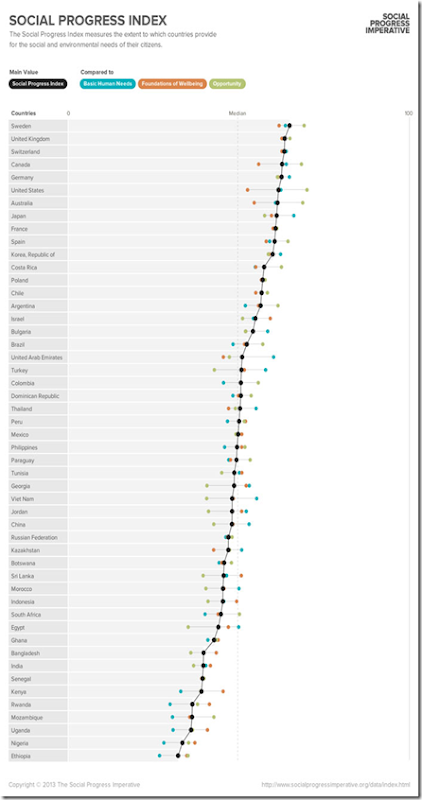 The most interesting observation in this empirical study is that no country was able to score in the top half of all dozen components measured including medical care, sanitation, shelter, safety, access to knowledge, information and higher education, wellness, ecosystem, personal rights and equity. This implies that progress in some of these dimensions are negatively correlated with others. Those seeking to design better future societies need to understand the causes of such correlations as well as have an overall view of portfolio management.

The source of negative correlations among factors of progress is likely temporal. The impact one can achieve by investing in certain dimensions is higher than others in the short run. However, such a skewed portfolio allocation may adversely affect overall progress in the long run. Very large countries such as India, pulling up the rear, is symptomatic of its lack of understanding of how to manage a portfolio of seemingly contradictory objectives. Focus on any one area at the cost of others may be useful to win elections for its leaders but it will likely keep it bottled up for decades.

Another large country, the US, albeit being on top, shows that it is necessarily sub-optimizing available opportunities. The immense talent available to it has been constrained by its increasing political and bureaucratic inertia, which if left unchecked, has the potential to bring the galloping nation to slow saunter. Although portfolio management principles are well understood, the current system prevents it from making optimal allocation decisions. The tendency to complicate policy decisions, either because of lack of understanding or for political gains, has created a regime that seems to be controlled by the incompetent.

Good performances by small countries, such as Sweden and Switzerland also imply that scale is a huge impediment to effecting beneficial policy changes. The real question for the countries down the list is how they can take advantage of their size and learn from the mistakes of those showing persistent under-performance.

(1) Michael Porter unveils new health and happiness index, the Guardian.
Posted by Gill Eapen at 8:41 AM No comments: