The rise in freelance lecturers in US educational institutions is concerning from many perspectives. The first question is why this is happening. If this is emanating from cost reduction (and profit enhancement), it is akin to short-sighted companies focused on next quarter’s EPS instead of better products and strategies. A related question is whether the decline in full-time tenure track faculty is a conscious effort to contain R&D (and perhaps costs).

The US business schools have been educating bean counters for many decades now. They equip them with the “latest tools,” fully capable of demonstrating maximum earnings in their companys’ income statements. Now, there are indications that the administrators of these venerable “not for profit” institutions are practicing what they have been teaching. Sure, reducing costs are important but if it adversely affects the products they make, in this case the graduates of these schools, it is going to come back and bite them later.

It is time that the universities in the country rise to the accountability of creating the best educated generation, yet. If they regress to the gimmicks of failing companies, they have only themselves to blame for the results.
Posted by Gill Eapen at 5:56 PM 1 comment:

A recent study in the Proceedings of Royal Academy: Biological Sciences shows that the breadth and depth of one’s network are important determinants of skills acquisition and retention. This makes intuitive sense but now data proves it as well. In the context of expanding electronic social networks, it will be interesting to assess the correlation between skills and network scope.

Human brains have always been terribly constrained in the absence of external stimuli. An interesting question is whether the quality of one’s network is as important as its size. Those with stringent criteria for network building with ex.ante biases are likely to build “pure” networks. Such networks, however, are unlikely to extend the thought processes of the participants. On the other hand, promiscuous network builders may build very large systems quickly but may derive little benefit from it as diversity may create a level of noise that is incomprehensible. Logically, then, there is an optimal network building strategy to maximize skills building.

The next battleground – social networks – present a challenging design problem for humans.

Posted by Gill Eapen at 7:19 PM No comments:

The value of time

A recent study from the Mayo clinic that shows extremely high mortality in patients who are over 75 years old who have elected to undergo dialysis is sobering. With over 40% of the sample population passing within six months and a high percentage unable to return home, one has to wonder if decision-making could be improved. This is indeed a difficult question, one that may not have a clear answer, but it is worthwhile to think about it.

If human life cannot be infinitely sustained, then, there is an optimal decision point to extinguish it. If the objective function is a combination of individual and societal utility, maximization of value would require a mutual decision. If human life is standardizable, allowing high substitutability, life would appear to be a wasting asset. In such a situation, life will unambiguously lose value with time and the option held by the individual and society mutually to terminate would be optimally exercised earlier than what current norms allow. Thus, modern societies need to postulate better exits for its members.

On the other hand, if science and technology slopes indicate a step-function change to improve the life span of humans by orders of magnitude, then, exercising the option to exit early is suboptimal – both for the individual and possibly for society. In a world of declining aggregate number of humans, such an exit is extremely expensive. Assuming substitutability, the value of a human life, then, is a function of stock and flow of humans as well as the forecasted lifespan of an individual.

Thus, the value of remaining time for an individual can be reliably forecasted using a few attributes such as total population, net rate of growth and the probability of extension of human lifespan in the near future.

A recent article published in the journal of PLOS pathogens show data indicating that evolvability is an important characteristic of selection. This is a finding that points to the importance of optimal control in a multi-stage game of evolution. Random mutation and single stage selection always sounded too simplistic to many. Now, it appears that evolution is not necessarily that straight forward.

Ridiculing each others’ position has taken much of the air time for debating evolution. There is no theory (let alone hypothesis) that could NOT be modified with new data and insights. Those bowing to the super creators of religion fight endless wars with the super scientists, who have figured it all out. Well, in physics about 4%, in biology less and in economics lesser. Flexibility of mind is much more valuable than conventional belief systems. As much of the world turn around predictable axes, the rest have to attempt to move thoughts forward.

If evolution, indeed, is a multi-stage game and selection shows optimal control, then, one has to question contemporary ideas. If evolution is intelligent, what may not be?
Posted by Gill Eapen at 8:37 PM No comments:

Recent research from MIT shows structural and mechanical guidance from snails and clams improve the designs of robots. This is in a favorable direction of the application of Mathematics, informed by optimal designs from Biology. Vertical specialization has been substantially dampening breakthrough innovation in both engineering and medicine. Synergistic cooperation between mathematicians and biologists could steepen the innovation trajectory in both.

Engineers have been utilizing data in creative ways for centuries. This is a discipline that has invented and utilized much of the analytics, currently rediscovered by scientists. The basic notion that biological systems are too complex to be systematically analyzed using data, kept the discipline back for decades. Now, human genome and big data seem to have broken the shackles.

However, one has to be careful jumping into “big noise,” with presumed success. There will be setbacks and some may declare victory prematurely at the first sign of success. There is significant potential here but it would require professionals with limited horizontal view to trade their egos for a chance of higher success.

Posted by Gill Eapen at 6:34 PM No comments:

News that a new species of bacteria was found in two category 4 clean room facilities used for assembling payloads for space in two different parts of the World illustrate the difficulties of executing sterilized exploration. This coupled with the fact that earthly organisms were found on Mars probes indicate that the first inhabitants of the planet continue to fool their somewhat more evolved cousins. This is concerning, as humans have a forgettable history of negatively influencing areas they have explored in the past.

Physical exploration of space appears too archaic in the presence of improving technologies for remote viewing. More importantly, the fascination to physically explore the Solar system, apparently to find life, may have to be tempered based on the recent hypothesis that there are at least 8 billion Earth like planets orbiting Sun like stars in the Milky Way alone. Human exploration of the Solar system for extraterrestrial life is a bit like riding a bicycle around the house in an effort to find Lions or some other majestic animals. It is unlikely.

It is time we rethought micro space exploration. The expected information gain from such exploits is close to zero.

Posted by Gill Eapen at 6:13 PM No comments:

India’s successful launch of the Mars Orbiter Mission (MOM) is good news. After a few weeks in the Earth’s orbit, the orbiter will be heading out to the famed red planet. The journey, however, is fraught with danger with only the ESA making it in the first attempt. 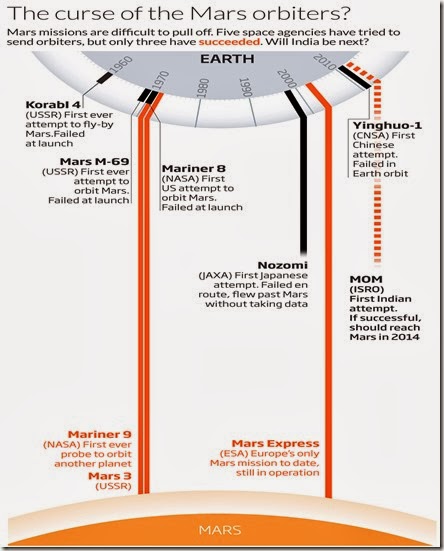 A larger question is why India (and before that Japan, China and the ESA) attempted to develop their own technology for the Mars mission. After the US and Russia have already demonstrated viable technologies to reach the orbit and then land on Mars, it is unclear why reinventing such technologies is an economically good decision.

The utility a country derives from developing its own Mars mission may have four parts.

Public Pride (PuP) = Pride from achieving something for humanity

Public Data (PuD) = Data and information that will be disseminated publicly

Private Data (PrD) = Data and information that will be held confidential

If the total cost of the mission is C, the the return to the country is (V-C)/C. However, since the true economic value of pride is close to zero, the country’s real return from such missions is low. It can, however, boost this return by acquiring such technologies from countries that have already demonstrated viability.

For example, in India’s case, if it is able to swallow the less valuable pride, then it could buy the technology (from the US or Russia) for just PrD. By doing so, it loses PrP but the selling country will likely subsidize PuP and PuD. In this case, its return from the mission is (PuP+PuD)/PrD. This is likely substantially higher than developing the technology on its own. At the very least, the cost will likely be an order of magnitude less.

More generally, society can maximize return on space investments if follower countries (after a single country has accomplished the goal) simply buys the technology from the leader to execute missions.

Posted by Gill Eapen at 6:25 PM No comments:

A recent study in The American Naturalist suggests that animals show an equal level of behavioral unpredictability as humans. Observations of adult male mosquitofish over a period of time also seem to indicate that some individuals are more unpredictable compared to others. The authors hypothesize that such unpredictability represents behavioral flexibility that facilitates learning or creates confusion for predators.

These observations have implications for modern organizations also. Large enterprises implement organizational constraints to reduce behavioral volatility of its employees – in how they work, execute tasks, get trained and deliver products and services. They also measure time and effort at detailed task level and they generally view volatility in such metrics as undesirable. These actions by companies may be decreasing the ability of their employees to experiment and learn. The long term impact of this could include declining innovation rate, lack of job satisfaction and stagnant productivity.

Unpredictability and behavioral flexibility may have a positive impact on the viability and growth of organizations.

Posted by Gill Eapen at 5:47 PM No comments: